Strength of a Service Dog 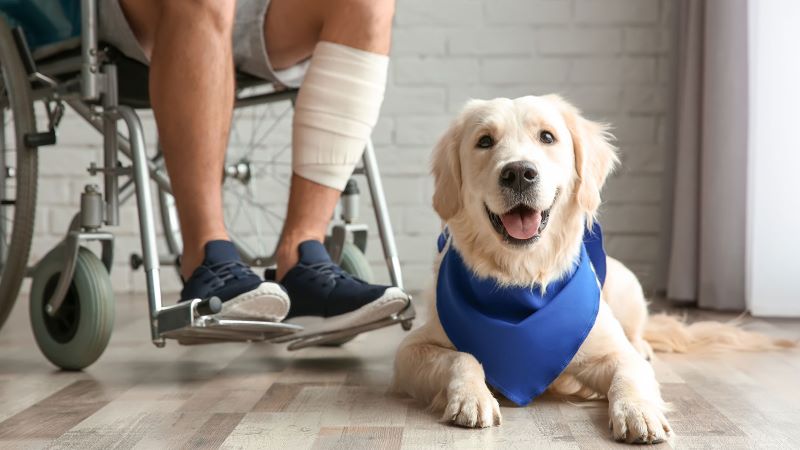 Every once in a while, a story crosses my path that I just cannot forget about.  This is a story of love and compassion, of perseverance and overcoming obstacles.  And it has a golden retriever in it.  Maybe I’m a little biased, but a sweet story and my favorite kind of dog?  It has to be shared.

Griffin the Golden Retriever can do more than just turn on the lights and open the refrigerator. He can attend every one of owner Brittany Hawkins’ classes alongside her, and at the end of the semester, walk proudly across the stage to receive his Honorary Master’s Degree from Clarkson University in New York.

Hawley, who has a chronic pain condition, became depressed as she was finishing up her undergraduate studies, having been told she would not be able to physically walk across the stage to receive her diploma.  The psychologist she was seeing at the time had a service dog, which motivated Hawley to look into adopting one herself.  She was connected with PAWS for People, an organization that raises, trains, and places assistance dogs with a variety of people--from first responders to veterans to people with disabilities.  When Hawley met Griffin, it was a perfect match.  Griffin opened doors literally and figuratively for Hawley.

“We've been in it from the beginning. We moved to New York together, we went through school together and we moved back to North Carolina together,” Hawley said. "He made going to school a lot easier for me because I had anxiety with people and going out by myself, and he opened doors I never thought would've been opened.”

Griffin has given Hawley a confidence she did not have before.  In an emergency, Griffin can follow a laser pointer to retrieve items, like a cell phone, or keys.  He can assist with a wheelchair, get things out of the refrigerator, and turn lights on and off.  But the unconditional love Griffin gives Hawley may be the real reason she was able to put in the work and earn her master’s degree in occupational therapy.  “He was someone I could talk to about the pain and not be judged,” Hawley said in an interview with NBC News.

Hawley was also Griffin’s biggest advocate when it came time for graduation.  “I was so excited from day one (and) pushed for him to get a diploma. To me it wasn't good enough just for him to walk across the stage. He did everything, he didn't miss a class. He did everything I went to and I thought he deserved it, because I wouldn't have been able to finish," she said.  And so, Brittany isn’t the only one with a document that shows off her degree.  Wearing a cap and gown (that he wasn’t too wild about), Griffin walked across the stage by Brittany’s side, and received a diploma of his own.

Brittany Hawley finished up her interview with NBC News by saying of Griffin, “He represents independence and love.  He gave me the ability to live my life alone.”  Although her service dog does grant Hawley more independence, she doesn’t have to worry about going it alone.  Her fiance, who works for the service dog agency where Brittany got Griffin, got the dog in on the proposal when he popped the question.  In November, Griffin sported a “Will You Marry Me” collar, and the three are excited about starting the next chapter of their lives together.