Comparing Garfield to the Typical Cat 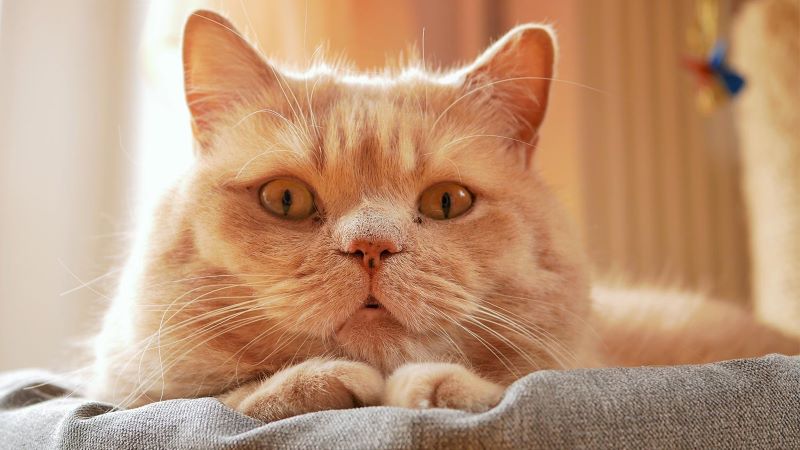 Every December, there is one holiday special I can be sure my kids will insist upon watching.  Garfield.  The lasagna-loving, Monday-hating, lazy orange cat who made his debut 41 years ago.  They will celebrate with the family when Garfield successfully puts the star on the top of the tree, they will howl with laughter when the Grandmother plays the piano and warns the family not to touch the keys afterwards since they’re on fire from her performance.  And their hearts will warm when Garfield presents a stack of letters he happens upon to that same Grandma, and she is overcome with tears at the memory of her late husband.

In honor of National Garfield Day, celebrated June 19, I thought it would be fun to compare the fictional character of Garfield to the typical domestic cat.  Below, some things you might not know about Garfield, and how his mannerisms and desires compare to that of a real live cat.

1. Garfield is afraid of heights.

Most cats actually thrive on perching in high places.  In the holiday special, Garfield is asked to put the star on the top of the tree and does so with great trepidation.  For the common house cat, the desire to be in high places is actually innate.  According to Bridget Lehet, a certified feline training and behavior specialist, “In the wild, a higher place serves as a concealed site from which to hunt.”  A cat may also enjoy the feeling of dominance associated with being up high – a feeling of being “top cat.”

Cats actually can learn to coexist with their dog roommates!  Even though Garfield does not particularly like Odie, they manage to get along because they have been together as long as they can remember.  The same can be expected of a dog and cat that are raised together.  According to Mikkel Bekker, Certified Behavior Consultant Canine (CBCC-KA), a cat who has been exposed to a friendly dog during the prime socialization period (from two to nine weeks of age), should be likely to accept a dog as a housemate.  In the article, Cats and Dogs Can Live Together--With Some Careful Planning, she mentions a specific situation where she trained a golden retriever who was being raised with a kitten.  Bekker explains, “They've learned to successfully read each other’s body language, and they engage in appropriate play since they have lived together from the very beginning.”

However, cats should NOT eat lasagna.  Cats cannot break down carbohydrates, so eating noodles is not a healthy choice for them.  According to the article, Obesity in Cats and How to Put a Cat on a Diet, cat owners should feed their cats a meat-based diet, with a high protein level in the 35-45 percent range and a low percentage of carbohydrates.  The article goes on to say, “A multitude of research reports have proven that diets high in protein and fat are most beneficial for carnivores. Cats cannot handle large carbohydrate loads efficiently. After a meal rich in carbohydrates, the feline’s blood level of glucose tends to stay higher than normal for long periods of time.”  In other words, if Garfield was a real cat, he’d be obese and well on his way to developing diabetes.  Not to mention, most lasagna contains onions and garlic, both toxic to cats.

4. Garfield is sarcastic and elusive.

Everyone knows Garfield really loves Jon. Garfield shows his affection in a variety of physical ways, just as a common house cat will.  In a popular Garfield comic strip, Jon tells Garfield that he’s feeling unloved, and Garfield presents Jon with his beloved teddy bear, Pooky, and a satisfied grin.  Another comic shows Garfield snoozing (with a smile on his face) in Jon’s lap, and Jon feeling irritated by the fact that even when he stands to his feet, Garfield is still “attached” to him, claws dug into his clothing.  Cat lovers can no doubt identify with Garfield’s behavior.  Cats are known to “knead” their owner’s laps as a sign of happiness and trust.  According to Adi Hovav, a senior feline behavior counselor, “Cats show affection by sticking close to their human companions, very often sleeping next to them.”

Things we can learn from garfield

Give a little extra love to your cat.  Give him room to get vertical, feed him a protein-rich diet, and let him snooze by your side.  Just don’t go feeding him any lasagna.  We’ll save that for the cartoon cat!